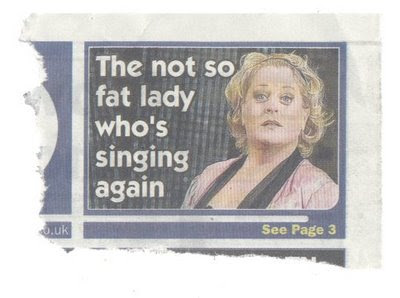 Ariadne auf Naxos opens with an extended backstage prologue, in which cast changes are imposed at short notice by unseen authorities. The history the Royal Opera’s current production seems to be a case of life imitating art; Deborah Voigt was initially booked for the title role but was then sacked because she was too large for the costume. She finally appears in this, the third revival having lost around ten stone through a gastric bypass procedure. Celebrity stomach surgery is currently hot news in the UK, with the daytime TV presenter Fern Britton recently at the centre of a tabloid hypocrisy witch hunt for secretly having her stomach ‘stapled’ while advocating more traditional weight loss regimes to her viewers. No surprise, then that Deborah Voigt has also come under tabloid scrutiny (although slightly more surprise that it is deemed worthy of a front page slot in the Metro, London’s freebie commuter celebrity gossip rag). In fairness, though, Voigt has been very open about the whole affair. It was she who broke the news of her having been dropped from the production, and she has given numerous interviews on the subject since (including this one) and has even appeared in a YouTube self parody, in which she confronts the black cocktail dress that was the initial source of her woes.

But something doesn’t add up. Peter Katona, the casting director who made the decision to sack Voigt from the first production, was adamant that she would not look right in the dress that he had planned for the part. The opera has a 1930s setting, but could hardly be described as revolving around the styling of this single dress. Voigt does indeed look more agile in her now less-than-Wagnerian frame, but the amount of movement required is minimal and could surely be tackled by an overweight singer, even one weighing twenty five stone.

Whatever their reasons, the management have finally come round to the right choice for the part. It took Voigt the first ten minutes or so to settle her voice into the role, but after that she was pure Strauss. She still has the projection and support of a singer of her earlier frame, though a slight brittle edge is now apparent. Most importantly though, she has the star quality needed for the final scene, and her closing duets with Robert Dean Smith as Bacchus carry the evening.

The ravishing bitter-sweet closing scene is Strauss’ party piece as far as opera is concerned, and I couldn’t help the feeling that, in the case of Ariadne, it is the work’s single redeeming feature. The story is ludicrous, even in opera terms (it is about a pantomime troupe invading the performance of a classical tragedy), and the characters are stubbornly two dimensional (perhaps that’s why Voigt had to slim down to fit the role). But it all trundles on for a few hours until it is time for the grand closing scene. Sadly, the performance took a similar approach, with competent but uncommitted playing up until the closing numbers. Mark Elder conducts with a firm hand, and emotions are never allowed to boil over. Perhaps he was just trying to maintain some order in this bizarrely incoherent score, but more Staussian passion would have been welcome throughout, not just in the send-you-home music.

Welcome to Orpheus Complex, London’s newest classical music blog. I’m a slightly lapsed musicologist and composer but ever committed concert-goer. This blog will be about the classical events I get along to, and as it is already June, you can expect a strong Proms focus in the coming months.

But first a word or two about the title of my blog. Cursory research (i.e. Googling it) suggests that I’m not the first to have thought up the term ‘Orpheus Complex’. The New York based composer and artist Elodie Lauten writes eloquently (here) about the Orpheus complex as the psychological consequence to the artist of working in a ‘time of cultural devaluation’. A kind of Freudian superstructure for writer’s block perhaps? One of the composer’s ‘neo-operas’ is entitled Orpheo, suggesting that she takes the classical references slightly more seriously than I intent to.

The notion of an Orpheus complex has also been invoked by Terence Dawson in an article about Woody Allen’s Deconstructing Harry (abstract here). Dawson’s abstract makes the point that the persistence of mythical analogies in 20th century arts and criticism is mainly a result of masculine thinking, as women seem better able ‘to free themselves from identification with the mythic pattern.’ We men all have lessons to learn from the ladies then, and perhaps no one more so than Woody Allen.

‘The Orpheus Complex’ is also the name of a mime-based stage work performed by Theatre de l'Ange Fou in London in 2005, a work based, not surprisingly, on the myth of Orpheus. This too appears to be a highly appropriate use of the term and far more apposite than my own misappropriation. In fact, you are unlikely to find any deep psychology in the posts that follow. Mythical archetypes will also be notable by their absence. To the authors, artists and scholars mentioned above I offer my heartfelt apologies for using their terminology in vain. The fact is, I just think it sounds good.
Posted by Gavin Dixon at 02:17 No comments:
Email ThisBlogThis!Share to TwitterShare to FacebookShare to Pinterest
Newer Posts Home
Subscribe to: Posts (Atom)