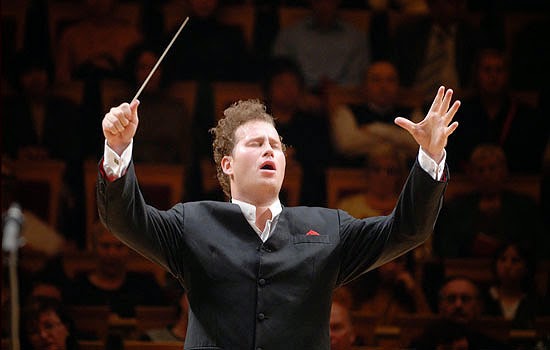 If you are one of the greatest violinists of your generation, pursuing a second career as a conductor is always going to involve overcoming prejudices. Nikolaj Znaider has faced that challenge head-on, and has persuaded the kind of people who matter, including Valery Gergiev, who has appointed him Principal Guest Conductor of the Mariinsky Orchestra. His guest appearances on the podiums of the world now match the prestige of his concerto engagements.
And yet the suspicion of moonlighting persists. This evening’s performance seemed very much like the work of a great musician who has yet to fully master the role of conductor. His musicianship is unquestionable, and his many years as a concerto soloist have given him the ability to effortlessly maintain control of the proceedings – an important transferable skill. But conducting demands more, and many aspects of the performance suggested that his skills here are still developing. He isn’t a particularly dynamic presence on the podium. His baton technique is reasonable, but is based on a very limited vocabulary of gestures. And his communication with the orchestra lacks dynamism and spontaneity, especially in these demanding works.
Don Juan is a virtuoso showpiece, as much for the conductor as for the orchestra, so Znaider was playing high stakes by opening his concert with it. He launched the work well, pushing the players to greater heights of energy and lyricism with every phrase. But when the excitement of the opening died down, the quieter music exposed a reluctance to shape or structure the music. Tempos remained stiff throughout. Transitions were awkward, and sudden outbursts seemed to surprise the conductor more than they did the audience. Gradual build-ups worked better, and Znaider has an impressive ability to drive into climaxes. But when the drama subsides, the music becomes frustratingly rigid. A lack of atmosphere is the greatest failing, at least of Znaider’s Strauss, and the quiet ending of Don Juan seemed curiously arbitrary here, as if the conductor had lost interest long before the delicate closing bars.
The Brahms Double Concerto suffered less. Znaider’s methodical approach better suited the formality of Brahms’ traditional structuring. This evening’s soloists, Roman Simovic and Tim Hugh, are leader and principal cello of the orchestra. The clear benefit is innate chemistry between the two, the result of regular duetting in orchestral contexts (and there was some of this from them in Zarathustra later on). The matching of timbre and phrasing between the two soloists was ideal, and the fiendish octave passagework in the first movement was precisely co-ordinated. The disadvantage was a certain lack of bravura from either player, neither of whom held the stage or dominated proceedings the way a true concert soloists might, like, say...Nikolaj Znaider. The interactions between soloists and orchestra also spoke of long collaboration. Generally, the violin and cello stood out from the ensemble as they should, but on the occasions when Brahms requires them to gradually fade into the string section they do so magnificently.
Znaider was on better form with Zarathustra. He clearly knows this work well (both Strauss works were conducted without a score) and the problematic architecture here was presented as both meaningful and logical. The orchestra was on excellent form throughout the concert, but Znaider made some entries difficult with ambiguous cues. Even so, his tempo relationships were all very astute, if, again, the transitions between them were sometimes awkward. Climaxes were thrilling, something both orchestra and conductor should take credit for. But, as with Don Juan, the quieter music was more problematic. The waltzes were all very four-square (OK, three-square), and the ending lacked mystery. Znaider clearly does not share Strauss’ fascination with Nietzsche’s description of the void, and all the discussion of darkness and night in the work’s programme had little bearing on the way he performed it. The results were certainly engaging, but always seemed two-dimensional. Perhaps Znaider is programming Strauss as a challenge to himself, an exercise to fill in the musical requirements of a conductor that he has not developed through violin playing. If so, that’s all very laudable, but the London Symphony Orchestra deserves a more experienced guide through this music, especially as this evening they demonstrated a flair for it that few other orchestras, anywhere in the world, could match.
Posted by Gavin Dixon at 01:56 No comments:
Email ThisBlogThis!Share to TwitterShare to FacebookShare to Pinterest
Labels: London Symphony Orchestra, Nikolaj Znaider, Roman Simovic, Tim Hugh
Newer Posts Older Posts Home
Subscribe to: Posts (Atom)