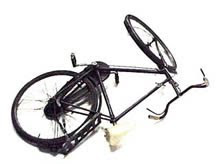 Match the composer to the unfortunate circumstances of their demise (alleged or real). Many thanks to 'Nicedoc' at Yahoo Answers for this one.


a. Died when a bookcase fell on him
b. Died by riding his bicycle into a wall
c. Died when he smashed his foot with a pole while keeping rhythm and it got infected.
d. Died from cholera after drinking unboiled water.
e. Died after getting sick in the cold after being locked out by his wife
f. Died from mercury poisioning as a complication of syphilis treatment
g. Died from complications from an insect bite
h. Died from complications after being whacked in the head while in a taxi
Posted by Gavin Dixon at 09:59 1 comment:
Email ThisBlogThis!Share to TwitterShare to FacebookShare to Pinterest
Labels: Composer deaths

Henry Wood was an adventurous conductor, and regularly risked the disapproval of the public by presenting them with works by composers they might not like: Wagner, Schoenberg, Stravinsky, and – horror of horrors – Max Reger!
The Proms this year are staging an interesting event, a recreation of the 1910 Last Night. A good number of Wood’s ‘novelties’ are on the programme, Ambroise Thomas, German, Forster, in fact, there is only one deviation from the original schedule. And guess who’s been given the boot – Reger of course. The (very fine) Violin and Piano Suite Op.103a is making way for the premiere of a cello concerto reconstructed by David Matthews from fragments by Vaughan Williams.
The Matthews/VW concerto will, no doubt, be fascinating, but what is it about Reger that UK audiences find so unpalatable? He is not at the peak of fashionability in Germany either, but at least they maintain a healthy respect for his industry, his forward-looking harmonies and his Bachian contrapuntal ingenuity.
Reger died in 1916, so perhaps his name became associated with the anti-German feeling of the First World War. What else could it be? He was a Brahms disciple, and it took many in the UK a long time to come to terms with Brahms (GBS never did).
Or perhaps the problem lies with his organ music. A large slice of Britain’s professional musician demographic came through the cathedral choir route, and so were probably exposed to more organ music than is healthy for anybody. Reger is popular with organists, at least more so than with other musicians, but many of his organ works or a bit on the ingestible side. I’m a big fan of Reger, but even I would concede that a little of his organ music goes a long way, which is unfortunate, as much of it is very long indeed.
But Henry Wood was quite right to concentrate on the chamber music. There is some magnificent music here, the solo works for violin and cello are excellent, many of them, I’d also highly recommend the Piano Quartet op.133 and the two Piano Trios opp. 2 and 102.
So here’s to the rehabilitation of Max Reger, a fitting homage indeed to the forward thinking and always constructively controversial Sir Henry Wood!
Posted by Gavin Dixon at 07:51 No comments:
Email ThisBlogThis!Share to TwitterShare to FacebookShare to Pinterest
Labels: BBC Proms, Henry Wood, Max Reger

Well, here's the 'evidence':
http://www.mdcbowen.org/p2/sf/faq068.htm
and here is some curiously heated debate on the subject:
http://chris.quietlife.net/2003/03/13/was-beethoven-black/
You decide.
Posted by Gavin Dixon at 04:26 No comments:
Email ThisBlogThis!Share to TwitterShare to FacebookShare to Pinterest
Labels: Beethoven
Newer Posts Older Posts Home
Subscribe to: Posts (Atom)