Elgar and the BNP 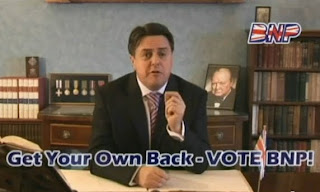 Watching the recent election broadcast from the British National Party, it is clear that they have constructed an iconography of Britishness around the heroic achievements of just two men: Churchill and Elgar.
The basic format is narration to camera interspersed with wartime footage, and Nimrod from the Enigma Variations playing quietly under both. Of course, it’s synched so that the climax four bars from the end corresponds with their main slogan, the not particularly inspiring ‘Get your own back – VOTE BNP!’ (Sorry, I’m not going to link to the video, but you can find it online if you really want to.)
My first reaction was irritation at the co-option of Elgar’s music. It is a staple of the advertising industry, of course, and being out of copyright it is longer under anybody’s protection. I got to wondering which recording they used and how the rights were negotiated. From the sound quality, I would say it is quite old, but certainly not old enough to be out of public domain.
What is the party trying to say through the use of Nimrod? I suspect that they are relying on the fact that enough voters are sufficiently musically literate to know that it was composed by the same hand as ‘Land of Hope and Glory’. So, Elgar without the march rhythm equates to benign nationalism, and equates nicely with another (slightly desperate) slogan in the broadcast ‘We don’t hate anyone.’
What would Elgar have thought? In fairness, I suspect that there is an element of the BNP’s patriotic message that he may have sympathised with. However, I can’t help the feeling that linking his music with WW2 imagery is wholly inappropriate. He was famously indifferent to the British involvement in the First World War, saying that his only sympathy was with the horses caught up in the conflict.
And then there is ‘Nimrod’ himself, the composer’s close friend August Jaeger, an employee at Novello. Jaeger was born in Düsseldorf, and the Nimrod variation was inspired by a conversation with him on a very Teutonic subject, the music of Beethoven. Jaeger was also well known at the time as an advocate of the black composer Samuel Coleridge-Taylor. I wonder what Nick Griffin would make of that.
Posted by Gavin Dixon at 03:44 No comments:
Email ThisBlogThis!Share to TwitterShare to FacebookShare to Pinterest
Labels: BNP, Edward Elgar

I was at Covent Garden again this week, this time to interview Alessandro Corbelli, an undisputed master of opera buffa and regular guest at the Royal Opera. He is currently appearing in Il Turco in Italia and will be staying on for the revival of La Fille du Régiment. Then in the autumn he's back for a new production of Adriana Lecouvreur. So there was much to discuss! Read the interview at: http://www.gavindixon.info/Interview_with_Alessandro_Corbelli.htm
Posted by Gavin Dixon at 09:19 No comments:
Email ThisBlogThis!Share to TwitterShare to FacebookShare to Pinterest
Labels: Alessandro Corbelli, Royal Opera
Newer Posts Older Posts Home
Subscribe to: Posts (Atom)