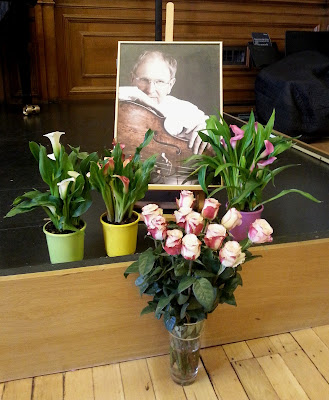 This conference was convened to celebrate the legacy of Professor Alexander Ivashkin, and its two days seemed woefully brief, given his huge range of interests and activities. We left with the feeling that even a week would have barely scratched the surface. Fortunately, the papers and recitals at least touched on every important aspect of his career, giving a good overview of his research and performing interests. The event was hosted by Goldsmiths, where Ivashkin served for many years as Chair of Performance and Postgraduate Studies as well as Director of the Centre for Russian Music. It was organised, with typical energy and boundless enthusiasm, by his widow, fellow cellist Natalia Pavlutskaya, who was ably assisted by Elena Artamonova, one of Ivashkin’s many former students at the event. An honourable mention, too, to Imogen Burman-Mitchell, Events Manager at Goldsmiths, for organising the logistics of five varied recitals over the two days, all of which ran without incident, and even began and ended on schedule – no mean feat.

Elena Artamonova opened proceedings with a broad survey of Ivashkin’s career, an excellent framework to which later presentations could add detail. She was the only speaker to address Ivashkin’s career in Moscow in the 1970s and 80s, and her discussion of his doctoral work on Charles Ives was particularly interesting. I’ve long fostered an ambition to tackle Ivashkin’s monograph Charles Ives and the Music of the 20th Century (1991), and this put me one step closer to dusting off the Russian dictionary and getting to it. Artamonova pointed out that the book is about far more than just Ives’ music, and the broad, contextual nature of Ivashkin’s research in general was a recurring theme of the papers that followed. Another angle of Ivashkin’s personality was explored by Olga Tabachnikova in her ‘Alexander Ivashkin and the Theme of Russian Irrationalism’. Anybody who knew Ivashkin personally will know that esoteric knowledge systems—Theosophy and Chinese astrology, for example—where sources endless fascination to him, so it was fitting to hear about this aspect of his personality, especially within the context of his writings on Russian culture.

Despite his undeniable authority on Ives, Penderecki, and many other 20th-century composers, Ivashkin is likely to remain most closely associated with the music of Alfred Schnittke. Fittingly, then, several papers discussed Ivashkin’s work on Schnittke, his publications, of course, but also his performances and recordings. Svetlana Savenko (the only visitor from Russia to reach us, visa complications preventing several others), talked about how Ivashkin had studied the funereal aspects of Schnittke’s music of the 1970s, Victoria Adamenko (in absentia, I read her paper) looked at Schnittke’s Pasternak settings, Paolo Eustachi Ivaskhin’s performances of the Second Cello Concerto, and I gave a survey of the Schnittke-related events that Ivashkin had organised in the UK in the years since the composer’s death.

The conference also aimed to reflect the sheer breadth of Ivashkin’s academic interests, and so included several presentations of new research in areas close to his heart, if not directly related to his work. Vladimir Marchenkov presented a theory of music as ‘Ludic Transformation of Time’, and Razia Sultanova presented a paper based on her recent research into the cultural activities of Muslim migrants in Moscow. Two papers were presented on Soviet-era music: Daniel Elphick gave an incisive analysis of the Socialist Realist strictures guiding Soviet chamber music, and Amrei Flechsig discussed the representation of laughter in Soviet operas.

Many of Ivashkin’s teaching and research activities were related directly to performance studies, and this too was reflected in the conference programme, with several friends and former pupils giving performance-related presentations. Nicholas Walker discussed Balakirev’s piano playing, Magdalini Nikolaidou the interpretation of Rachmaninov’s Études-Tableaux, and Valerie Welbanks the extended techniques employed by Roger Redgate in his Black Icons, a cello concerto written for Ivashkin. The spirit of Ivashkin was particularly close in these presentations—Ivashkin very often illustrated his talks with playing, on the piano or the cello, moving fluidly between speaking and playing, and in several instances here we were treated to similarly enlightening combinations. Also, in the cello/performance category was a stimulating discussion from Rebecca Turner about the cello music that Ivashkin commissioned and performed in his decade in New Zealand in the 1990s. This was particularly valuable for its coverage of this period of Ivashkin’s career, but also for how it demonstrated his continual curiosity, coming to a new land and immediately engaging with the musical culture there. Turner described how Ivashkin had worked closely with a range of New Zealand composers as well as engaging with the traditional music of Polynesian islanders.

Naturally, live performances made up a significant part of the conference, and, as with the talks, the music covered a broad range of Ivashkin’s musical interests and was mainly presented by former colleagues and students. The highlight was Dmitri Alexeev performing the Scriabin op. 11 Preludes—world-class piano playing of the Russian school. On the subject of world famous Russian musicians, the Alexeev performance was followed by the unveiling of a permanent memorial to Ivashkin at Goldsmiths, a portrait of him with Mstislav Rostropovich on the occasion of Rostropovich being awarded an honorary doctorate at the college. The other recitals were given by former students and colleagues, focussing primarily on Russian repertoire—Viktoria Zora, Elena Artamonova and Rebecca Turner gave an excellent performance of the Schnittke String Trio, in a recital that also included Prokofiev and Rachmaninov from Mikhail Bozylev, recipient of the recently instigated Alexander Ivashkin Scholarship at Goldsmiths. A piano recital by Andrew Zolinsky brought the post-Soviet connection right up to date, with recent works by Mansurian, Knaifel and Silvestrov. I was particularly drawn to the Knaifel Postludia, although most people I spoke to, including the pianist himself, felt the Silvestrov Third Sonata was the highlight of the programme. The Ligeti Quartet (of which Val Welbanks is cellist) also ventured into adventurous territory with the John Cage Quartet in Four Parts and Gubaidulina’s most recent work for string quartet, Reflections on the Theme B-A-C-H.

A fitting tribute, then, to the musical and scholarly activities of Alexander Ivashkin. The programme often seemed to move in diverse and unrelated directions, but this only served to demonstrate the sheer breadth of Ivashkin’s musical interests. And the event closed with a performance that brought us right back to the man himself—a solo cello recital of music close to his heart. The cellist was Sebastian Hurtaud, a winner of the Adam Cello Competition in New Zealand, which Ivashkin and Pavlutskaya founded. A Bach Cello Suite (No. 5) opened, followed by Britten’s First Suite, which appears on Ivashkin’s very last commercial recording. And to end, Klingende Buchstaben, a piece written for Ivashkin by Alfred Schnittke and based on the letters of his name: A fitting coda to a memorable and moving celebration. Clearly, Ivashkin’s legacy lives on. 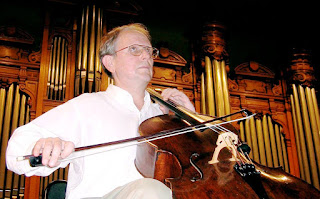