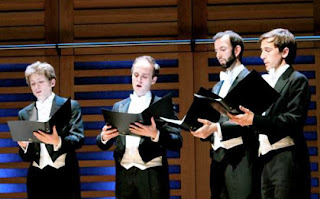 In a season dominated by Messiahs, spare a thought for the Christmas Oratorio. Were it not for Handel’s perennial singalong, Bach’s masterpiece would have far higher visibility on our Christmas programmes – and it certainly does on the continent. But this evening, the Platinum Consort and the OAE made an impressive effort to redress the balance. The results were festive, lively, imaginative, and, above all, joyous from beginning to end.
The Oxbridge chapel choir culture benefits the wider musical scene in this country in all sorts of subtle and indirect ways, but in recent years, a more direct channel for the talents they foster has been established, in the form of professional chamber choirs made up of their recent alumni. Platinum Consort is one such ensemble, established in Cambridge in 2004. When it comes to Bach, they’re competing with the best, and a few concessions need to be made for the performers’ age and level of experience. Even so, this is an impressive choir, one with a distinct identity and a clear passion for the music. The over-riding emotion in Bach’s Christmas Oratorio is joy; it’s an exuberating an up-front work, and that’s exactly how these young singers presented it. The choruses that open the first and sixth parts demonstrated this perfectly. Sure, there were slight ensemble problems here, but any lack of unity in execution contrasted a firm unit of intent. The singing was clear, focussed and committed - there was never any suggestion that they were just going through the motions.
Working with the Orchestra of the Age of Enlightenment was a mixed blessing for the singers. The OAE fielded a small ensemble, two violins on each desk but otherwise one to a part, but even in these small numbers the players dominated, if not in volume, then in experience and stylistic authority. The theorbo in the continuo was a particularly nice touch, and it is a credit to the exceptional Kings Place acoustic that he could always be heard. There were plenty of other fine things to hear from the orchestra too. The obbligatos from flautist Lisa Beznosiuk and leader Margaret Faultless were ideal. The fruity bassoon (Andrew Watts) was a real treat. And the trumpet section was led by the unparalleled David Blackadder, who stole the show every time he picked up his instrument – but how could he not?
Conductor Scott Inglis-Kidger, a co-founder of the choir, seemed to be aware that he could take the orchestra’s high standard of performance as read, and so focussed most of his attentions on the choir. He led diligently, ensuring the music breathed with the singers and was always carefully shaped. There was plenty of emotion here, and occasionally too much, especially in the chorales, which often seemed over-milked.
Soloists were drawn from the choir, and many of the young singers proved to be remarkably talented. The role of the Evangelist was taken by Benjamin Clark, a tenor who is surely destined for greatness. He sings with all the authority that the role demands, his tone focussed but rich, his diction ideal, and his sensitivity to music’s stylistic demands beyond question. Most of the other singers got a recitative and aria, and there were no weak links. Countertenor Raffaelle Pè deserves a mention. He sings with a sophistication that belies his age, his performance filled with nuance and shading far in advance of any of his colleagues. But, as I understand it, he is already on the fast track to an operatic career, and so probably doesn’t need any further promotion from me. One other name to look out for, though, is Eloise Irving. Her soprano voice is at the other end of the spectrum, pure and clear, with remarkable versatility and agility. She had one or two intonation problems on the faster runs, but overall, her solos were among the most satisfying of the evening.
An impressive performance then, of Bach’s underperformed (or so it seems in London) masterpiece. The singers demonstrated impressive skills, both as an ensemble and as soloists. If they were outclassed by the orchestra, there’s no great shame in that, given that the OAE is one of the world’s great period instrument ensembles. In fact, the programme suggested that further collaborations are planned. If the result is further performances like this, that can only be a good thing.