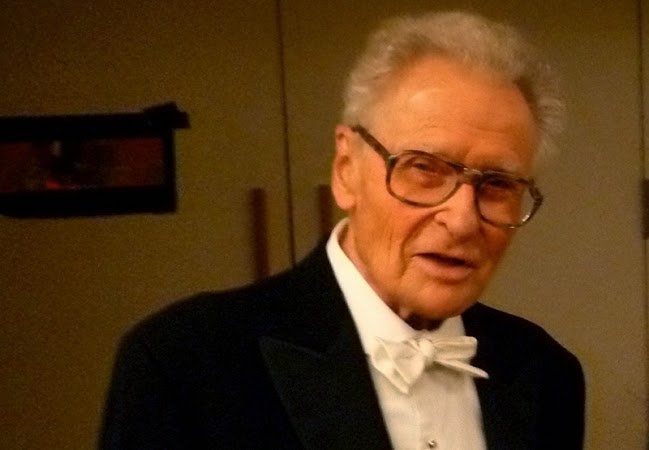 An age difference of 65 years separated this evening’s soloist and conductor - and it showed. Following their performance of the Mendelssohn, the young violinist Benjamin Beilman skipped on and off the stage as he acknowledged the applause. Skrowaczewski followed him, at some distance behind, his walking resolute but impeded by a limp, his pace his own, unperturbed by the prospect of being lapped. It showed in the performances too. Beilman’s interpretation of the Mendelssohn was fresh and inquisitive, technically proficient, but often frustratingly safe. He engaged with the work’s expressive potential, but without fully realising it. The Bruckner that followed, by contrast, could hardly have been more consummate, a distinctive and personal interpretation that was clearly the result of a lifetime’s experience with the music.
Benjamin Beilman’s appearance with the London Philharmonic this evening was facilitated by a Music Masters Award, a scheme that offers high profile concert opportunities and mentorship for promising young performers. He is certainly a worthy recipient, a confident and technically proficient violinist who projects an effortless technical mastery and a distinctive personality that both belie his youth. He plays a Guarneri del Gesù (the 1735 ex-Mary Portman), and player and instrument make for a good combination, especially in the focussed, penetrating power that enables him to fill the hall with sound. It’s not a particularly pretty sound though, quite woody and sometimes a little hollow sounding, but it is carefully modulated and always engaging. His approach to the Mendelssohn is surprisingly strident, with expansive melodies and wide bow strokes. It makes for an unusual take on Mendelssohn’s usually intimate concerto, but the music doesn’t suffer for this most robust approach.
The lack of rubato is a greater problem. Beilman rarely takes risks with his tempos or phrasing, and he rarely gives the impression that he is in charge. As a result his solo lines often sound constrained, especially in the first movement. The performance got better as it went on though, the emotional reserve gave the slow movement a surprising elegance, and Beilman’s crisp and light articulation proved ideal for the scurrying finale. In general though this interpretation felt like a work in progress, technically proficient but not yet fully engaged with the soul of the music.
Skrowaczewski offered more with his Bruckner in the second half. Expectations ran high for this performance. His Bruckner cycle with the Saarbrucken RSO is one the true greats, but a live recording he made with the London Philharmonic a few years ago of the Seventh Symphony was even better, almost exactly the same interpretation as 25 years earlier, but performed by a clearly superior orchestra. This evening’s Third Symphony was in the same league; distinctive, often surprising, and utterly unique.
Many conductors give Bruckner’s Third everything they’ve got, huge dynamic contrasts, tempos that range from the frenetic to the static, and sensational climaxes that are all thundering timpani and blazing mariachi trumpets. Skrowaczewski is not in that game. His Bruckner is more considered, carefully balanced and always working within reasonable interpretive limits. He’s full of surprises though, often jerking the music into a different tempo or dynamic in just a few beats where others would labour a transition. His climaxes are loud, but always controlled, drawing excellent tonal control from the brass. Phrases are carefully shaped, but also flow naturally into each other: joined up musical thinking. But he’ll also make a point of cutting off sudden phrase endings, his left hand slowly raising and then shutting down the music with a decisive swoop. Movement endings are always definite but are never exaggerated. The ending of the first movement, a bit of a messy coda on Bruckner’s part, gradually builds up under Skrowaczewski’s baton, but he makes no effort to disguise the bitty and amorphous structure here, knowing that, despite its heterogeneous surface, Bruckner’s underlying cadential chord patterns will do the job. Similarly, the end of the work, where the opening theme returns in the major, is not presented as an earth-shattering apotheosis, but rather as a logical conclusion to the finale’s internal structure. But whatever restraint Skrowaczewski exerts, the results remain deeply emotive, the music’s religious depth communicated more through the sense of inevitability that he gives to its progression than to the otherworldliness of its climaxes.
Microphones were arrayed above the players throughout the concert, suggesting that this Bruckner performance will be joining the Seventh in the LPO Live catalogue. If and when it appears, buy without hesitation.
Posted by Gavin Dixon at 02:36
Email ThisBlogThis!Share to TwitterShare to FacebookShare to Pinterest
Labels: Benjamin Beilman, London Philharmonic Orchestra, Stanisław Skrowaczewski