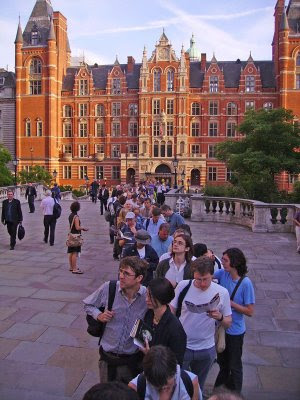 Boulez is a popular figure at the Proms, just look at the Arena queue. He filled the RAH with an all-Janacek programme, quite an achievement. Apparently Boulez is new to this repertoire, but you’d never guess that from these performances, which thrive on his trademark combination of expressive intensity and detailed precision.
The Glagolitic Mass is an ideal work for the Proms, especially with this line-up (Simon Preston’s organ solos are worth showing up for alone), but I couldn’t help the feeling that the timing was unfortunate. The work is an unapologetic endorsement of pan-Slavism, a political philosophy that has motivated expansionist policies in Russia since the Tsars. The reviews of this concert will, no doubt, be broadly positive, but will appear in newspapers with stories of Russian aggression in Georgia on the front pages.
Or perhaps I’m taking the music’s history too seriously. The Sinfonietta, which opened the concert, was originally conceived as music for a gymnastics tournament, so maybe Boulez is looking instead to the back pages and programming a celebration of the indoor events at the Olympics.
Posted by Gavin Dixon at 05:10 No comments:
Email ThisBlogThis!Share to TwitterShare to FacebookShare to Pinterest
Labels: BBC SO, Leos Janacek, Pierre Boulez, Simon Preston

Congratulations to the BBC for their Stockhausen Day in the Proms on Saturday. The works presented covered an impressive range of Stockhausen’s output, despite all being either pre- or post-Licht era. The first concert included two Klang works and Kontakte, bookended with two (that’s right, two!) performances of Gruppen. The idea of offering repeat performances of new and unfamiliar works in the same concert is not new, but is usually reserved for shorter, denser works, Webern or late Stravinsky. Gruppen runs to almost half an hour and so dominated the programme through is double presentation. I suspect that the logistics of arranging the orchestra (the BBC SO) into three separate groups, two of which were in the arena, made it seem sensible to maximise the return. I’ve no complaints though; both were wonderful performances, with the BBC SO once again demonstrating their specialist skills in this repertoire.
Paul Hillier and the Theatre of Voices also proved themselves to be both competent and comfortable with Stockhausen’s eccentric scoring and performance directions in Stimmung in the late-night concert that followed. The work is known to most (me included) primarily from recordings, and the recording recently made by this group cannot be recommended too highly. But witnessing the spectacle and ceremony of a live performance of this most ritualistic of works takes the whole concept to another level.
And, of course, Karlheinz Stockhausen recently passed to another level himself. The two Klang works in the earlier concert (one a premiere, the other new to the UK) must therefore be considered as amongst his very last utterances. Harmonien for solo trumpet didn’t do very much for me, but Cosmic Pulses, a purely electronic work, demonstrated why the composer is still worthy of his god-like status in electronica circles. Computer music with 3D spatial projection must be one of the few musical genres for which the Albert Hall is ideally suited. The work takes a group of straightforward musical ideas and runs them simultaneously through permutations of duration, pitch and location. Complex and mesmerising sounds result from this deceptively formulaic process, with the ear continuously drawn around the hall by gradually evolving motifs. The work concludes with each of these streams ascending, both in pitch and location to the speakers around the top gallery. The spinning continues, and the music gradually diminuendos as it seems to lift above the roof of the hall. A final goodbye perhaps, from a spirit who understands its proper place to be far above the earth; a signal pointing straight to its ultimate destination in the Sirius star system.
Posted by Gavin Dixon at 11:16 No comments:
Email ThisBlogThis!Share to TwitterShare to FacebookShare to Pinterest
Labels: BBC Symphony Orchestra, Karlheinz Stockhausen, Paul Hillier, Theatre of Voices
Newer Posts Older Posts Home
Subscribe to: Posts (Atom)