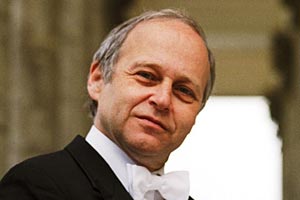 It’s impossible to take your eyes off Adam Fischer. His every gesture at the podium is unique and unpredictable. He clearly lives this music, and the way that he communicates it is utterly distinctive. Fischer conducts without a score, no mean feat considering the length of this oratorio. The recitatives are none of his business really, but in each of them he stands in rapt attention, his arms crossed and his eyes fixed on the soloist. Occasionally he will mouth the words, seemingly in wonder at the quality of the delivery. And then he’ll turn to the audience and nod enthusiastically, to make sure we know that he likes what he’s hearing.

Fischer’s communication with the orchestra is exemplary too. He’s no tyrant, and often tempos seem more suggested than imposed. But he has a firm grip of moods and styles. When he wants scurrying textures from the strings, for example, he’ll hunch his back and start jumping round the podium in jerky crab-like movements. He certainly has a direct line to Haydn, and especially to Haydn’s optimism, the key quality of The Creation. There were some minor flaws here, but none mattered compared to the sense of intense joy that radiated from the podium.

The OAE appeared in a particularly large configuration this evening, with four desks of firsts and seconds. This facilitated a good balance, although the Festival Hall did some sections more favours than others. The flutes were particularly prominent, as were the bassoons, but the oboes, clarinets and trombones (with the notable exception of their lion roars) were all but lost to the acoustic. Schola Cantorum, Oxford gave a proficient performance, and responded well to Fischer’s ebullient conducting. There were occasional issues of ensemble and lack of tonal focus, but for an amateur ensemble they quit themselves well.

The three soloists made for a curious but ultimately successful combination. Soprano Sophie Bevan sang with an operatic, almost coloratura, tone, but any suspicions of anachronism were swept away by the sheer musicality of her singing. She had a few small intonation issues, especially at the top, and Haydn severely tested her technique with scale passages across the break, but these technical issues were minor concerns. Andrew Kennedy began the evening in an erratic mood, but settled into a more controlled style towards the end of the first part. He lacks tone in the lower register but his voice has plenty of character in the upper range. Andrew Foster-Williams gave the best vocal performance of the evening. His tone production was close to ideal, and the range of emotions he brought was pitch perfect: the serious passages with a light, almost ironic, edge, and the joyous passages uncomplicated and direct.

Adam Fischer’s take on The Creation was undoubtedly developed in musical environments very different to this. His opera work has put him in good stead to juggle the competing demands of soloists and orchestra. He also has a dramatic sensibility that works well here, making the most of pregnant pauses in the opening choruses, for example, but without ever moving outside of strict 18th century conventions of taste. He’s the ideal conductor for this orchestra, and one they should welcome back at the earliest possible opportunity.
Posted by Gavin Dixon at 01:24 No comments:
Email ThisBlogThis!Share to TwitterShare to FacebookShare to Pinterest
Labels: Adam Fischer, Orchestra of the Age of Enlightenment
Newer Posts Older Posts Home
Subscribe to: Posts (Atom)