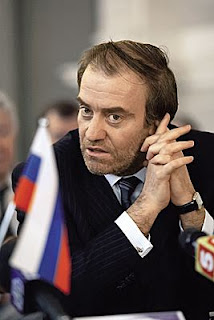 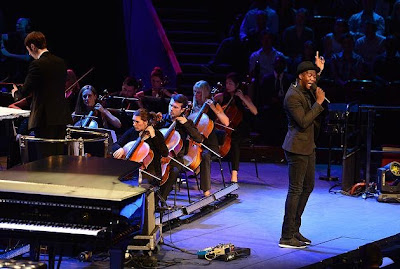 
Just four days ago, the BBC Symphony Orchestra was at the Albert Hall performing Lutosławski and Holst, now here they are accompanying Fazer from N-Dubz. The ever-expanding ambitions of the Proms can be gauged by the bizarre diversity of the music these players find on their stands as the season progresses. It’s rare to hear a full symphony orchestra at an urban music gig. Rare, but not unprecedented. The Urban Classic Prom is the third “Urban Classic” event to have combined young urban artists with BBC orchestras. Last year, they put on a similar event at the Barbican, and on the strength of its success they’ve now brought the concept to the Proms.
The audience tonight must have been a dream come true for the BBC’s demographics department. The idea was to combine classical and urban music, in the hope that the audiences for both genres would come along. And so they did. Well-dressed teens and 20-somethings made up at least half of the audience, while the rest seemed to be the standard middle aged and older Proms regulars. The arena season ticket holders were scared off though, and there was no unison announcement at the end of the interval about how much we had raised for musical charities. But their places were enthusiastically taken by a younger generation, who transformed the arena into a proper moshpit.
Each half began with something properly classical, the first with Mosolov’s Zavod, the second with “Dance of the Maenads” from Henze’s The Bassarids. As the Mosolov started up, it became clear that the orchestra was heavily amplified. That’s no great sin in urban music, nor should it be in the Albert Hall, given the state of the acoustic here. But the amplification was too much, giving a synthetic sheen to the string sound and obliterating what little subtlety there is in Mosolov’s industrial sounds.
For the rest of the gig, the orchestra was essentially reduced to a backing band. Additions included three excellent backing singers tucked in to the left of the woodwind, a keyboard player with some funky analogue synths, and a drummer, the rock-steady Troy Miller, sitting centre stage encircled in glass isolation panels.
Conductor Jules Buckley has the ideal stage presence for this set up. He is professional but unassuming, and the ideal foil (and occasional straight man) for the more ego-driven soloists. Buckley was responsible for some of the orchestral arrangements, and on the night acted as diplomat and go-between for the two performing cultures.
The six headline acts were well chosen: all young, obscenely talented, and with enough musical personality for each to stand out. The first act was Maverick Sabre. He’s a Soul singer of the old school, though he is only in his early 20s. Sabre’s style benefited from the lush orchestral backing; the BBC SO strings playing heavily amplified chords beneath his rich vocal.
Next up was Laura Mvula. She’s a great artist for this project, properly ‘urban’ but also classically trained and well able to find her way around a piano keyboard. She sang three numbers, each in a completely different style and mood. The most impressive was Father, Father, which ended the first half. For the first verse she was accompanied by a chorale of trombones and in the second by a similarly evocative string accompaniment. This was one of Buckley’s arrangements, and one of the best orchestrations of the evening.
Jacob Banks had the most impressive voice of any of this evening’s soloists. He is a young man, tall and with a narrow frame. But his voice is just extraordinary, deep and throaty with lots of soul. He could easily make a career in opera (I’d love to hear his Sarastro), but it would be a shame to divert him from this rich, bluesy soul.
The rap acts were Fazer, Lady Leshurr and Wretch 32. Judging by the apoplexy that greeted his name every time it was mentioned, Fazer was the big draw of the evening. He certainly knows how to hold the stage and how to work the audience. His vocal is slick and focussed, and carries well across the huge orchestra. Lady Leshurr is a high-octane performer. Her stock in trade is a fast, percussive patter, rhythmically propulsive and again well-suited to orchestral backing.
But backing is all the orchestra really did this evening, and the promised meeting of classical and urban music was weighted almost exclusively towards the latter. The aim of introducing new audiences to classical music is hardly going to be furthered by presenting a symphony orchestra as a little-used backing band. One or two of the orchestral effects really worked, that lush string sound for the soul music, the trombone chorales for Laura Mvula, and some occasional mariachi outbursts from the trumpets towards the end. But in general, the 80-odd players of the BBC SO collectively made a far smaller contribution that the four-piece rhythm section.
Returning home and listening on the radio, it became apparent that we had been missing much of the orchestral detail in the hall. That was partly due to the excessive amplification, but ultimately comes down to the dreadful acoustic of the space. How depressing that even this music is defeated by the scale of the Albert Hall. Still, it was well worth going for the sheer buzz of the live event, being part of an audience as enthusiastic and casual as anything you’ll meet at the Last Night. But, as always with the Proms, it was a case this evening of going along to the Albert Hall to experience the atmosphere, then going home and turning on the radio to find out what you’d missed.
Posted by Gavin Dixon at 02:24 No comments:
Email ThisBlogThis!Share to TwitterShare to FacebookShare to Pinterest
Labels: BBC Proms, BBC Symphony Orchestra, Jules Buckley 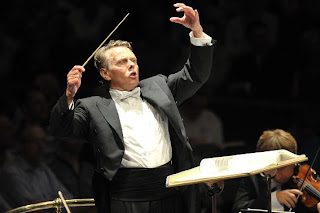 Mariss Jansons can always be relied on to give a distinctive performance, and that’s exactly what the Resurrection Symphony got tonight. Mahler isn’t central to Jansons’ repertoire, he’s more closely associated with the later generations, Strauss and Shostakovich, who took Mahler’s soundworld and refined it to create music of equal power but greater sophistication. We more often hear Mahler presented by younger and more impetuous conductors, who vie with each other to conjure more intensity, bigger shocks and greater contrasts. Jansons is not in that business; he’s more interested in balance, coherency and continuity. The Resurrection Symphony, as it turns out, appreciates this sort of treatment, which makes everything in it sound narrative and interconnected. Some of Mahler’s radicalism is lost in the process, but the result is a work that sounds more symphonic in every sense.
Rather than push the cellos and basses to the limit of their capabilities in the opening, Jansons instead took a steady pace, and the payoff was a remarkable unity of ensemble in these opening phrases. Even if he doesn’t take the tempos to extremes, he still insists on the full dynamic contrasts that Mahler writes into the score, and that maintains the drama at this slower pace. As the first movement progressed, it became clear that Jansons was determined to find continuity between each successive passage. All the phrases were elegantly shaped, and the tempos were always fluid, but there were no sudden gear changes, and every new idea was presented as if it were the inevitable consequence of what we had just heard. In general, the strings had the upper hand over the winds and percussion, and there was some surprisingly scrappy playing at times from the back of the stage. But the unity of intent mattered more, and it was clear throughout that every player and singer was on Jansons’ interpretive wavelength.
The sophistication of Jansons’ reading was most evident in the second and third movements. He drew a weighty tone from the strings at the start of the second, too weighty really, and too urbane – there was never any suggestion of a rustic dance here. The passage where the strings play their instruments like guitars was gamely done though, and was one of the many episodes here that showed Jansons’ lighter side. The third movement acted as a transition towards the finale, bringing the first hints of the violence that would be unleash later on. The restraint early on impressively contrasted the wilder climaxes towards the end of the movement, the slight inaccuracies in the woodwind playing almost seemed deliberate (were they?) in some of these outbursts, and particularly effective were the irregular piccolo trills, scribbled crudely across the top of the tuttis.
Urlicht introduced mezzo Gerhild Romberger, an ideal singer for the part. Her voice is throaty and full of dark colours, but her pronunciation impeccable, enabling her to clearly transmit each syllable across the hall. The trumpet chorale that answers her at the start of the movement was played by the off-stage band, a curious diversion from the score, but not an overly distracting one.
From the start of the finale it was clear that this is what Jansons had been building up to, and his restraint, especially in the second and third movements, was now revealed to be part of a scheme for delineating the work’s architecture. All of the ‘death’ music was presented with searing intensity, and with some excellent playing (finally), especially from the brass. The sense of continuity and narrative was still very much to the fore, though, and Jansons made every effort to keep a sense of flow going in each transition and tempo shift. He was going against the spirit of the music really, as most of it here is about shocks, sudden changes of mood and sudden revelations. Fortunately, when we got to the Resurrection proper, with the entry of the choir, Mahler finally got on to Jansons’ wavelength. The WDR and BRSO choruses sang wonderfully, and those pianissimo entries were perfectly handled, with Jansons holding the ensemble in the palm of his hand; the choir only breathed when he let them, and the audience too. Soprano Genia Kühmeier is not the equal of Romberger, but her tone is purer and less complex, making it a good complement in their brief duets towards the end.
The finale was impressive, particularly for the tonal control that the orchestra was able to maintain, even at the very loudest dynamics. Like many German ensembles, the BRSO plays to some arcane pitch standard (443 Hz probably), which prevented them from using the resolutely 440 Albert Hall organ. The electric one they brought along did the job, but it wasn’t the same. More of a disappointment in these closing passages was the acoustic, which swallowed up most of the sound, deflating what would no doubt have otherwise been an overwhelming experience.
But such is the way of the Proms, and even in its problematic venue, the season is to be congratulated for bringing us this and so many other world class performances. Jansons’ Mahler, at least on this hearing, isn’t the visceral and immediate musical experience that you can expect from Salonen say, or Dudamel, or even Jonathan Nott. It’s more considered and more refined. Jansons brings out dimensions of the music that his younger colleagues overlook, not least its innate sense of symphonic coherency. Most just take that for granted, but Jansons is intent on showing us exactly how this music works.