Is it just me, or is Paul Whitehouse the spitting image of Jascha Heifetz? 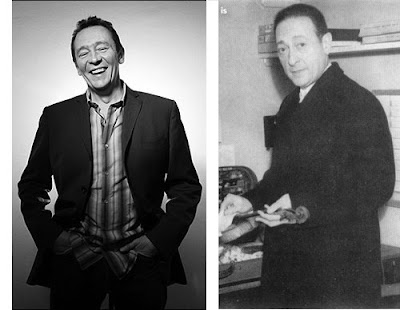 I'll get me coat
Posted by Gavin Dixon at 05:56 No comments:
Email ThisBlogThis!Share to TwitterShare to FacebookShare to Pinterest
Labels: Jascha Heifetz, Paul Whitehouse

What does David Sawer and Armando Iannucci’s new opera Skin Deep have in common with Korngold’s Die Tote Stadt at Covent Garden? Well, it seems both are good productions of lousy works. Curiously, though, we are being encouraged by the critics to go out of our way to see them, and not for the quality of the productions, but for the novelty value of the music. Charlotte Higgins, writing in her Guardian blog, broadly supports Andrew Clements’ opinions in his two-star review of Skin Deep then signs off by encouraging us to see the work on the grounds that it is ‘never boring’. Similarly, both Hugo Shirley and his (perhaps slightly more esteemed) colleague Norman Lebrecht, reviewing the opening night of Die Tote Stadt, basically say it’s a dud then encourage us to go along. Speaking for myself, I’m inclined to give them both a miss.
Posted by Gavin Dixon at 13:14 No comments:
Email ThisBlogThis!Share to TwitterShare to FacebookShare to Pinterest
Labels: Andrew Clements, Armando Iannucci, Charlotte Higgins, David Sawer, Erich Korngold, Hugo Shirley, Norman Lebrecht

The Genius of Alfred Brendel

I just bought a fancy new stereo - SACD, big amp, monolithic speakers, the whole bit. The sound is great, but for that money it ought to be. I put on the few SACDs that I've bought over the years, the Concertgebouw's new Alpine Symphony puts it through its paces. But the most amazing revelation, strangely, has been a 1991 recording of Liszt's B Minor Sonata by Alfred Brendel. The multiple layers, each at a different dynamic and articulation level, the polyphonic lines emerging from the middle or low register then gradually returning as the phrase runs its course. And, of course, the willingness to lay into the bass register when it's required. It's magnificent stuff, the stereo was worth every penny, but I hope I've something left over for a few more Brendel recordings.
Posted by Gavin Dixon at 01:52 No comments:
Email ThisBlogThis!Share to TwitterShare to FacebookShare to Pinterest
Labels: Alfred Brendel, Franz Liszt

The Kings Consort is, apparently, no longer happy with its name. This is reasonable enough, considering the recent revelations about the activities of Robert King. In fact, its hard to think of a worse name - Jonathan Kings Consort perhaps? What they've come up with isn't quite that bad, but it hardly rolls of the tongue. Still, the success of Ensemble 415, a group named after a pitch convention (sexy!), demonstrates that in period performance at least its the sounds you make and not the sounds your name makes that matter.
Posted by Gavin Dixon at 12:19 1 comment:
Email ThisBlogThis!Share to TwitterShare to FacebookShare to Pinterest
Labels: Retrospect Ensemble, Robert King

The English can't lay claim to many of the world's greatest composers. A pity, then, that we can't even agree on the pronunciation of the immortal names the country has produced. Henry PurCELL was relatively uncontroversial until revisionist scholars (i.e. busybodies) adopted a stress on the first syllable - Henry PURcell. A least one blogger has pointed out that the last syllable stress is preferred by the composer's living namesakes. Could it just be that they, like the classical music community at large, chose to distance themselves from a certain leading brand of washing powder?
Posted by Gavin Dixon at 01:33 No comments:
Email ThisBlogThis!Share to TwitterShare to FacebookShare to Pinterest
Labels: Henry Purcell 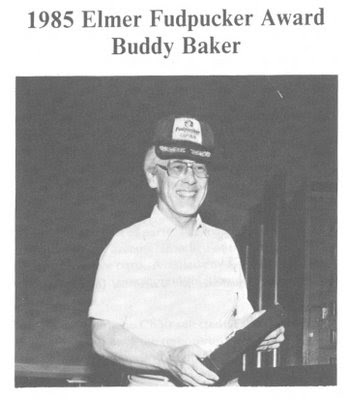 I've just found this in a 1985 journal of the International Trombone Association. It's a joke of some sort, it must be, right? It appears to have been awarded at the end of each AGM according to a strict set of criteria, although history fails to record their details. Buddy Baker seems pleased with it though.
Posted by Gavin Dixon at 16:07 No comments:
Email ThisBlogThis!Share to TwitterShare to FacebookShare to Pinterest

and speaking of Mendelssohn, it's shaping up to be a quiet anniversary year for him. In the UK, all manner of Purcell, Handel and Haydn activities are planned, but Mendelssohn seems to have dropped off the bottom of the list. Perhaps he didn't visit quite as often as he should, but it was enough to keep him on Queen Victoria's Christmas list. Norman Lebrecht ran a column in December lamenting his neglect, and now I see that Jessica Duchen and Tom Service have picked up a juicy story about suppressed love letters in the basement of the Royal Academy of Music. Could this be the first ever composer anniversary to be celebrated exclusively by blog?
Posted by Gavin Dixon at 06:58 No comments:
Email ThisBlogThis!Share to TwitterShare to FacebookShare to Pinterest
Labels: Felix Mendelssohn

2009 is Darwin year (as well as Purcell year, Handel year, Haydn year, Mendelssohn year...), and for those music/science type institutions looking for musical Darwin links, Niles Eldredge has some interesting angles. He's a palaeontologist who has turned his biological theories to the development of the cornet. Apparently it is easier to keep track of the dates of cornets than trilobites because 'Trilobites don't come with serial numbers.' Sounds like the musicologists have got it easy for once.
Posted by Gavin Dixon at 14:06 No comments:
Email ThisBlogThis!Share to TwitterShare to FacebookShare to Pinterest

Large concert halls do orchestral music no justice at all, so it was an inspired decision of the National Youth Orchestra to present their January programme to London audiences at the Camden Roundhouse. Visually the setup is stunning; the audience in the round with the orchestra surrounded by a circular colonnade of iron pillars. The conical roof is not ideal – much of the sound is lost in the rafters – but this is compensated by the proximity.
Having attracted an audience that sold out the Albert Hall at last year’s Proms, it was no surprise that this smaller venue was also filled to capacity. And the confidence of a virtually audience has encouraged adventurous programming, with the first half consisting of Bow-Wave, a new work by Peter Wiegold, followed by Berio’s Sinfonia. The two works formed a satisfying contrast, with the unselfconscious musical theatricality of Wiegold’s work a refreshing aural appetiser for the more culturally sophisticated language of Berio’s masterpiece.
Bow-Wave was performed by the NYO players (under the composer’s baton) entirely from memory. This considerable feat allowed the composer to integrate some actions, Mexican waves passing along the row of horns, spinning cellos and an epilogue in which the entire ensemble faces the back of the stage. Occasional and light hearted, but carried off with panache.
Sinfonia continues to stand the test of time, as was amply demonstrated by this engaged reading from an ensemble whose oldest members were born over twenty years after its premiere. Its central message, that art and music must redefine their roles within the cultural saturation of modern society, was apt for the Camden setting. The work opens with vocal soloists (London Voices) chattering in an array of European languages, which was immediately reminiscent of the short walk up Camden High Street from the tube to the venue. Postmodernism in music often implies (and requires from performers) a familiarity bordering on indifference to the standard repertoire that appears in quotes and references. But Berio’s approach is less jaded, and the orchestra’s enthusiastic interjections of snippets from Mahler, Debussy and Ravel in the third movement were as convincing as any on record. However, this meant that the vocal soloists had a harder time being heard; even with amplification they were often swamped, and much of the crucial text was lost.
The second half was given over to Strauss’ Alpensymphonie, for which the NYO swelled to its fullest size, with some 160 players occupying every corner of the vast stage. Such a large ensemble leads to inevitable ensemble issues, even with players of this calibre. Semyon Bychkov addressed the problem with an emphatic reading of the work, strict, often brisk tempi and emphasised details that may otherwise have been swallowed up in the sound. Strauss’ climaxes - the summit and later the storm - benefited from the large orchestra without the quieter passages suffering unduly.
Of all the fine qualities the young players of the NYO displayed, the most remarkable was stamina. The long programme concluded with ten minutes or so of quiet but intensely concentrated music in the sunset, close and night movements of the symphony. The performance here was immaculate, the piano woodwinds finely balanced, the trombone chorales precisely co-ordinated. The highlight of the evening and an example that many of their professional counterparts would struggle to match.
Posted by Gavin Dixon at 04:25 No comments:
Email ThisBlogThis!Share to TwitterShare to FacebookShare to Pinterest
Labels: Luciano Berio, National Youth Orchestra, Peter Wiegold, Richard Strauss, Semyon Bychkov
Newer Posts Older Posts Home
Subscribe to: Posts (Atom)