The Homage Etudes (for solo piano)

Poems and Prayers (for mezzo-soprano and piano)

Romance in A minor Op. posth.

Tchaikovsky, Schnittke: Susan Bickley (mezzo), David Hansen (counter tenor), Robert Murray (tenor), Mark Stone (baritone), BBC Symphony Orchestra, Vassily Sinaisky (conductor), Barbican, London, 18.02.11 (Gdn)
Tchaikovsky: Symphony No.1
Schnittke: Seid nüchtern und wachet (Faust Cantata)
Tchaikovsky's First Symphony is a great piece and deserves to be heard more. But it is a work that is susceptible to misunderstanding. Its title and the descriptive headings to each of the movements suggest a more genteel and pastoral score than what Tchaikovsky actually writes. This, combined with the fact that the work avoids the doom-laden fate motifs of his later symphonies, can lead to performances that underplay the music's dramatic potential.
Vassily Sinaisky is the man to put this to rights. The performance he conducted this evening made no concession to the composer's youth, nor to the imbalance between the score's monumental ambitions and its slightly lesser achievements. Instead, he conducted it as if it were the Fourth or the Fifth Symphony, making the most of the score's considerable dramatic potential. His tempos were never extreme, but he stretched the dynamic range at both ends, made every build-up and anticipation a real event, and strove throughout for maximum contrast of timbre and mood between the often disparate consecutive passages.
True enough, this did have the effect of highlighting the work's deficiencies. Those long orchestral build-ups don't quite add up in the way they might, or indeed in the way they do in Tchaikovsky’s mature scores, but by aiming for the effects that Tchaikovsky had in mind, rather than making concessions to the score he produced, Sinaisky gave the work the helping hand it needs.
The BBC SO were on top form throughout the evening, and they really shone in the Tchaikovsky. The intense dynamics Sinaisky drew from the strings took them well out of their comfort zone. The string tone in these louder passages was rarely pretty, but that was more than compensated by the sheer visceral intensity they produced. In the inner movements, it was the woodwinds turn to shine, and their various solos and ensembles were all delivered with conviction and lyrical intensity. Even here Sinaisky insisted on driving the music and playing it for maximum dramatic power, and like the strings, the woodwind gave him everything he needed.
If Schnittke's Faust Cantata has suffered undue neglect, and I'd be tempted to suggest it has, that can only be a result of the demands it makes in terms the orchestral forces. Unlike Tchaikovsky's First, this is a mature work and a work that delivers on its considerable ambition. You can't really do it by halves, you need the largest string section you can assemble and the largest choir. It must be a tough work to perform, whilst the discourse is generally tonal, Schnittke has a tendency to veer off into wayward chromaticism mid-phrase, but the forces amassed for this performance really excelled.
Sinaisky again went for maximum dramatic intensity, but where that often put him at odds with the nature and scope of Tchaikovsky's score, it was exactly in accordance with Schnittke's. The BBC Symphony Chorus took a few minutes at the start of the work to get into their stride, but from then on coped magnificently with Schnittke's many and varied demands. The soloists were a diverse group, but that also worked to the music's favour. Mark Stone played Faustus as a dignified but ultimately weak man, perfectly expressed through his controlled and never overpowering baritone. Robert Murray was by turns prosaic and compassionate as the tenor narrator, an appropriately solemn reading and a valuable reminder of the influence of Bach's Passions on the music. The Mephistopheles part is shared between a counter tenor and a mezzo, who this evening were David Hansen and Susan Bickley. On the night, Hansen outshone Bickley, producing a fabulously fierce and intimidating tone. Bickley seemed underpowered by comparison, which was probably be due to her having sung in the (presumably very demanding) première of Mark Anthony Turnage's Anna Nicole the previous night.
But otherwise an excellent performance, particularly, from the BBC SO. Both works need good performances to achieve their full effect, and that is exactly what they got here. An evening to remember.
Gavin Dixon
Posted by Gavin Dixon at 16:39 1 comment:
Email ThisBlogThis!Share to TwitterShare to FacebookShare to Pinterest
Labels: BBC SO, Schnittke, Sinaisky, Tchaikovsky

Mendelssohn, Weber, Beethoven: Anthony Pay (clarinet), Orchestra of the Age of Enlightenment, David Zinman (conductor), Queen Elizabeth Hall, London, 8.02.11 (Gdn)
Mendelssohn: Overture, Intermezzo and the Scherzo from A Midsummer Night's Dream
Weber: Clarinet Concerto No.1 in F minor
Beethoven: Symphony no.7
Not all orchestras are the same. That's the current motto of the OAE, but nobody has mentioned it to David Zinman, who spent most of this evening trying to get them to sound like his Tonhalle Orchestra. Fortunately, the tension produced was musically productive, there were no compromises here, and every reconciliation between ancient and modern was provisional. There were difficult negotiations, no doubt, but on balance everyone came out a winner.
Zinman seemed surprised by the level of the woodwinds in the mix. He put a great deal of effort into bringing up the sting section to a more predominant position, although his failures in that respect were as interesting as his successes. The Overture to A Midsummer Night's Dream set the tone. It is rare to hear such an opulent, Romantic sound from this or any period instrument orchestra. On the whole, it worked very well: the basses were slightly elevated on the platform and underpinned the sound with a real strength, while the other string sections gave Zinman the power he was looking for while retaining that distinctive gut string sound.
It took the orchestra a few minutes to warm to this approach, and the ensemble in the strings was shaky for the first few minutes. Zinman also had trouble conjuring the necessary magic from this music. The woodwind entries at the start were four-square and matter of fact, and the later pianissimo passages were not nearly as convincing as the tuttis. It was great to hear the ophicleide in those louder passages, one of the few brass instruments that is more often seen than heard, so to have it pumping out those bass lines was a real treat.
The Mendelssohn improved as it went on. The Intermezzo, Nocturne and Scherzo were inspired choices, simply for their showcasing of the woodwind and brass soloists, and if Zinman was responsible for this programming choice, then perhaps he understands this orchestra better than I was previously giving his credit for.
Anthony Pay is a fine clarinet soloist, but he doesn't look comfortable standing in front of an orchestra. He squints inquisitively at the audience, then begins shuffling the pages of his music – its not the sort of behaviour you'd expect from Lang Lang. He gave a fabulous performance though, of the Weber First Concerto. Listening to this work on a period instrument, you realise just what the challenges are that the composer sets. It isn't hard to make a pianissimo, round sound on a modern instrument, but here you really have to work at it. The louder notes are more secure on a modern instrument too, and that's a real shame, because Weber goes to great lengths to set up climaxes where the peak is very loud, very high note (C?) on the clarinet, and the timbre this instrument produces up there is clearly very fragile. You feel fortunate to have heard it at all, and after it is over the look on Pay's face is one relief. It makes for compelling listening. And what great orchestration in the Weber, at least as innovative as in the Mendelssohn. The second movement, for example, ends with the solo clarinet accompanied by just the horns, and the climaxes of the finale are garnished with trumpets. Fascinating stuff, and it provides plenty of scope for Zinman to put in an almost operatic reading of the orchestral accompaniment.
Given the obvious aesthetic tensions in the first half, it was almost inevitable that Beethoven 7 would be a hit and miss affair. So what worked and what didn't? Well, the second movement misfired. Zinman started it immediately after the last chord of the opening movement, a smart move in theory for keeping the momentum. The trouble was there was too much momentum, it too fast and too mechanical. He again had trouble with the subtlety of the quieter passages, and with the balance between the woodwind and the brass.
The other three movements worked much better. As with the Mendelssohn Overture, the first movement was carried by the sheer energy of the tuttis. The strings excelled in both the outer movements, giving Zinman the symphonic depth he was looking for, while always retaining that valuable period instrument detail of sound. The finale benefited most from this, it had all the energy of a full sized modern orchestra, but more detail in the string counterpoint than any modern instrument ensemble could ever hope for. Despite Zinman's efforts to suppress the woodwinds, he was surprisingly happy to give the trumpets and timpani their heads. Again, that didn't always help the balance, but in the finale of the Beethoven it was just what was needed – the icing on the cake.
A triumphal conclusion, then, to an otherwise mixed concert. The OAE's policy of hiring guest conductors with little experience of period instruments has come in for surprisingly little criticism. Of course, there is no reason why somebody like David Zinman should know anything less about the Romantic repertoire than the players of an orchestra founded on baroque and classical principles. And they are certainly broadening their horizons with guest conductors of this calibre. I wonder if the influence will work the other way? If the next time you hear a recording of the Tonhalle they are all using gut strings with no vibrato, you'll know whose responsible.
Gavin Dixon
Posted by Gavin Dixon at 15:38 No comments:
Email ThisBlogThis!Share to TwitterShare to FacebookShare to Pinterest
Labels: David Zinman, Orchestra of the Age of the Enlightenment 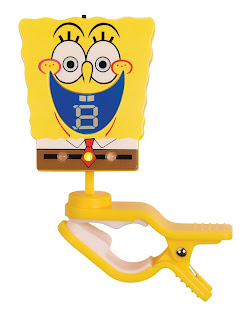 A press release just reached me about this exciting new product. It assures me that this is "a fantastic little piece of equipment" on the grounds that "SpongeBob spins, ducks and dives, meaning you can view the blue backlit LCD display from any angle."
Even more bizarrely "SpongeBob's teeth light up as you tune each note, instantly letting you know if you're flat or sharp. His two front teeth will light up when you're in tune. The note you're playing is also displayed as a large letter where SpongeBob's tongue would be."
Words fail me, although it wouldn't surprise me if somebody is able to retire on the proceeds.
Posted by Gavin Dixon at 09:20 1 comment:
Email ThisBlogThis!Share to TwitterShare to FacebookShare to Pinterest
Labels: SpongeBob SquarePants
Newer Posts Older Posts Home
Subscribe to: Posts (Atom)