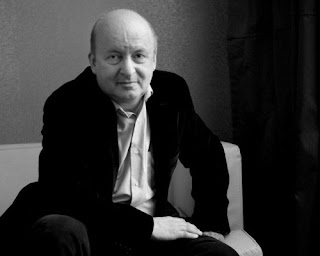 Alexander Raskatov (pictured above, image M.F. Plissart) is best known in the UK for his opera A Dog’s Heart, staged at ENO in 2010. The music there is anarchic, stylistically diverse and bleakly comical at every turn. But there is another side to the composer, a spiritual depth that informs his religious music, especially his choral works. The style there is unified and focussed, still distinctive, but refined in a way that his more overtly dramatic orchestral works are not.
Those two sides come together in Raskatov’s Green Mass, premiered this evening by the London Philharmonic under Vladimir Jurowski. It’s a huge work, 80 minutes of music for large orchestra, choir and four soloists. The piece explores two ideas, a setting of the Mass ordinary for these huge forces, and a celebration of nature, as expressed in poems by Blake, Georg Trakl, Velimir Khlebnikov, Apollinaire and Francis of Assisi, interspersed between the Mass movements. Raskatov is often accused of incoherency, so there is a clear danger here of the piece sounding like two separate works spliced together. In fact, it is impressively coherent. Raskatov’s trademark eclecticism is apparent throughout, and in every moment it feels like he is reaching out to find a new effect or musical device to deploy across the performing forces. But by doing this as much in the Mass movements as the poem settings, an uneasy, and paradoxical, continuity emerges.
Even so, the work also gives the impression that it is based on a more simple Mass setting, subsumed within the more complex orchestral and choral textures, and periodically rising to the surface to offer spiritual guidance amongst the chaos. The Kyrie opens with a simple three-note figure in the choir, each note held by the orchestra to create a simple dissonance: the two aspects of the work seem to start from a single source, and as the movement continues, the choir maintains the simplicity, while the orchestra increases the complexity and uncertainly beneath.
Blake’s “The Wild Flower’s Song” is set here for countertenor, the ever dependable Iestyn Davies. Here, for the first and last time, Raskatov indulges in pastoral tone painting, with the woodwinds singing birdcalls and fluttering in the breeze. The Gloria remains upbeat, the tone, if not the style, approaching Carmina Burana. Mark Padmore then sings Traktl’s “Lebensalter”, his German pronunciation a better match for the text than the rhythms of Raskatov’s setting.
“Clotilde” by Apollinaire is sung by soprano Elena Vassilieva. She is also the composer’s wife, and Raskatov regularly writes for her astonishing vocal abilities. She is a modern-music soprano in the Pierrot lunaire mould, and this movement displays her extraordinary vocal acrobatics in the upper register. Vassilieva must be well into her 60s, but it is difficult to imagine any other singer, whatever their age, matching this. The final song “Preghiera” of St. Francis is set for the four soloists, accompanied only by a collection of wind chimes, set in continuous motion by electric fans pointing upwards from beneath. It’s an eerie and magical effect, evoking nature, but in an abstract way ideal for the context.
In the final two Mass movements, the Benedictus and the Agnus Dei, the fog lifts and a more straightforward, consonant style emerges, especially in the choir, which was often supported by radiant chorales in the brass. What is Raskatov trying to tell us here? That the religious dimension of the work redeems all? It is difficult to see how this fits into the environmental theme. But then, the two ideas, the liturgical and the natural, are so closely interconnected throughout the work, that, in this optimistic ending, it feels like there are no losers.
The London Philharmonic gave an excellent performance. Despite the huge orchestra, filled with unusual instruments, balances were always finely judged.  Vocally, the performance was less secure. The four soloists made for a curious ensemble, Vassilieva’s coloratura sitting uneasily with the purer tone of Iestyn Davies, Mark Padmore and bass Nikolay Didenko. But this was in the spirit of the piece, just another stylistic juxtaposition for Raskatov to work with. The composer stymied a proposed second performance of the work, by an American orchestra, on the grounds that they could not provide a professional choir, so it was surprising to see the Choir of Clare College, Cambridge singing this evening. The young choristers handled the unusual techniques and textures well, although it sometimes seemed that the composer had a more bottom-heavy, Russian sound in mind. All of the vocalists were in the choir stalls, the soloists there presumably because the huge orchestra left no room for them at the front of the stage, and all were amplified. This seemed like a last minute solution to a balance problem, one that would have taken a larger stage and a large choir to resolve otherwise.
The concert opened with Beethoven’s Sixth Symphony, an obvious choice, but one that in retrospect only went to demonstrate the pastoral tone painting that Raskatov largely avoids. A pared-down London Philharmonic performed with a large tone, but with Jurowski maintaining disciplined tempos throughout. A mix-and-match approach to instrumentation saw the otherwise modern band accompanied by natural trumpets and period timpani in the storm, the former elegantly crisp, but the latter somewhat tubby. A competent performance of the Beethoven, but one that seemed to acknowledge that it was there mainly as a support act.
Posted by Gavin Dixon at 16:39 No comments:
Email ThisBlogThis!Share to TwitterShare to FacebookShare to Pinterest
Labels: Alexander Raskatov, Beethoven, London Philharmonic Orchestra, Vladimir Jurowski 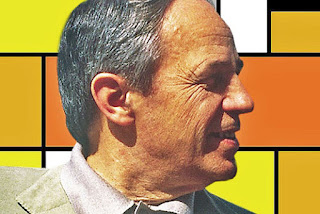 “To take a stand regarding Schoenberg?”
So Boulez began the famous diatribe against his predecessor, written soon enough after his death to add a calculated sense of disrespect. Now Boulez himself has left us, and, just as in 1951, the event feels like the ending of an era: Whatever the manifold achievements of the two men, their greatest historical legacy is to have defined their times.
But the difference in attitude is revealing. If we write “To take a stand regarding Boulez” no question mark is necessary. He made it his life’s work to define a polemic in which you were either with him or against him. His attitudes may have seemed to soften in later years, particularly with the increasing breadth of his conducting repertoire, but he kept his corner, and nothing in his later work could give rise to the accusations of regression that formed the main point of attack in his essay on Schoenberg.
By then, the Modernists had found a new figurehead, Anton Webern, whose aesthetic trajectory seemed to move in the opposite direction to Schoenberg’s, and who therefore was a better fit for the dialectical/progressive model for musical history that Boulez and his contemporaries attempted to foster. And for all his achievements as a composer, conductor and electronic music pioneer, it is the staggering success of that project that made him the defining figure of his times. Serialism, in its purest form, became not only an ideal but a necessity. As he famously said in 1952, “I … assert that any musician who has not experienced – I do not say understood, but in all exactness, experienced – the necessity for serialism is useless.” And if you were on the wrong side of this debate, you were on the wrong side of history, something else that could only be stated in extremes, as when Boulez’ colleague René Leibowitz in 1955 described Sibelius as “the world’s worst composer.”
How times change. What would either of these statements sound like if uttered today? Petulant, certainly, but also indicative of the marginal status, and even irrelevance, of the speaker. For these are no longer times of aesthetic polarity. The culture that Boulez fostered (along with many other composers of his generation, though most others in action rather than word) of new music as us against them, right vs wrong, and all based on purely aesthetic criteria, already seems like a distant memory. Modernist music of the sort Boulez championed is still with us – its progress continues – but its insularity has evaporated, and with it any sense of authority or higher moral purpose.
Boulez leaves us much: an impressive and unique catalogue of works, an enviable discography – and let’s not forget IRCAM. Yet his musical ideology has predeceased him by several decades. Just as the post-war generation could take the repertoire they had inherited but had to find a new framework in which to affirm its relevance, so Boulez’ successors must argue the case for his music in an environment already broadly hostile to its underlying assumptions.
Therefore, I do not hesitate to write, not out of any desire to provoke a stupid scandal, but equally without bashful hypocrisy and pointless melancholy:
BOULEZ IS DEAD
Posted by Gavin Dixon at 06:06 No comments:
Email ThisBlogThis!Share to TwitterShare to FacebookShare to Pinterest
Newer Posts Older Posts Home
Subscribe to: Posts (Atom)