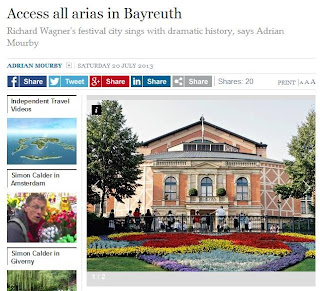 An interesting article appeared in last Saturday’s Independent, a travel piece by Adrian Mourby about Bayreuth to tie in with the opening week of the Festival there. The piece is evidently aimed at readers who don’t have tickets (“You don't get inside the auditorium without a ticket to the festival – and obtaining one can take years of lobbying”), so they would probably we well advised to postpone their trips until September if they want any hope of finding a hotel. The headline is a bit of a curiosity, “access all arias”, but was no doubt cooked up by a travel subeditor in blissful ignorance of how irrelevant the concept of an aria is to Wagner’s mature work.
More interesting though are the efforts Mourby makes to distance the composer and his festival from the most problematic of its 20th-century patrons. The relationship between Wagner and Hitler is complex, to say the least, and however anachronistic it may seem, both bear some responsibility for the perception of shared ideology that has come down to us. You wouldn’t know that from this article though, which goes out of its way to avoid the problem altogether.
Mourby writes: “Although Hitler preferred Franz Lehár's operettas, he recognised Wagner as a useful tool in the redefinition of German identity.” The idea that Hitler preferred Lehár to Wagner has been floating around for a few years; I first read of it, coincidentally, in an article in the same newspaper. I’m not going to question the validity of the claim, except to say that it is a real gift for Wagner apologists. Lehár’s stock couldn’t be lower these days, so few are likely to complain when he starts taking the flak-by-association deflected from Wagner. And even if Wagner was not Hitler’s favourite composer, he was almost certainly his second favourite, inspiring much Nazi ideology and taking a far more central role in the project than that of a “useful tool”.
Further on we read “Many people dislike Wagner by association because his daughter-in-law supported Hitler.” Again that’s true, but it’s not the whole story. The support was mutual to say the very least. And the complicity of the entire Festival in the Nazi project is something we should not ignore. That’s a complicated business, not least because the Bayreuth archives for this period still remain sealed, but it deserves a little more attention, or at least acknowledgement, than it receives here.
Finally, Mourby completes his tour at Wahnfried, where he writes, “For a left-wing revolutionary on the run in 1848, Wagner became adept at cosying up to the ruling classes.” A left-wing revolutionary? Mourby evidently did not take Adorno with him for his holiday reading. But you don’t have to be an adherent of the Frankfurt School to take issue with the idea that Wagner’s involvement in the 1848 uprisings was in support of ‘left-wing’ causes. This being Wagner, a whole book exists on this very subject, Wagner: Race and Revolution by Paul Lawrence Rose. The concept of revolution, Rose argues, as a progressive liberal or left-wing phenomenon is the result of a wholly modern prejudice. He goes on to point out that this deliberate misunderstanding has been continuously exploited in the rehabilitation of Wagner since 1945.
Of course, this is only a travel piece, so there is no point in going too deep into the ideology here. Mourby no doubt has a brief to make Bayreuth sound like an attractive holiday destination while allaying any fears from potential visitors that their trip will be mistaken for a neo-Nazi pilgrimage.
Don’t worry, it won’t. And when you get to the Festspielhaus, you’ll find the management there in a similar state of denial. But that doesn’t mean these issues are going to go away any time soon.
Posted by Gavin Dixon at 04:13 No comments:
Email ThisBlogThis!Share to TwitterShare to FacebookShare to Pinterest 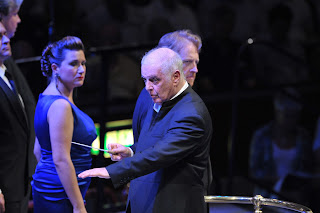