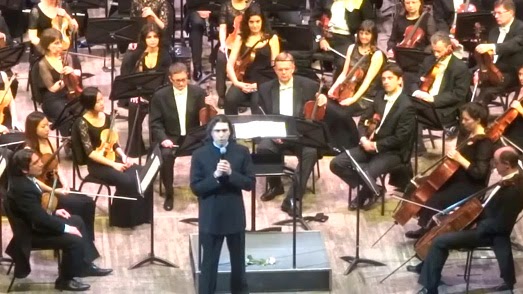 I was in Russia this week and heard about a remarkable concert earlier in the year, which doesn’t seem to have registered with the Western press. At the start of April, the London Philharmonic gave a performance of Britten’s War Requiem in Moscow under Vladimir Jurowski, a very high profile civic event linked to the year of cultural collaboration between Britain and Russia, and attended by a good number of high level dignitaries.
It is customary in Russia to give an address before concerts, and on this occasion Jurowski himself introduced the work. One of the points he made, quite emphatically, is that the work is a celebration of love, and specifically of homosexual love. He talks about the fact that Britten and Pears’ relationship had been illegal under British law and about the evils of institutional homophobia.
Given the current political climate in Russia, this was an extraordinarily brave move. A friend of mine who was there says that the VIPs in the audience all sat ashen-faced as Jurowski elaborated his point. Clearly, Jurowski exaggerated the matter; under other circumstances he would probably be unlikely to characterise this as a gay requiem. But his motivations for doing so here are clear.
A review of the concert published soon after (read it here) discussed Jurowski’s opening remarks at length, which is very unusual as critics usually ignore these addresses. The critic, Sergei Medvedev writes:
“Vladimir Jurowski has once again demonstrated not only that he is a great conductor, but also that he refuses to conform. This sets him apart from other well-known Russian conductors and is so important now in our cold spring of 2014, in a country obsessed with searching out its enemies and in the grip of paranoid homophobia.”
I’ll happily second those views. The most distressing aspect of what is happening in Russia now is the fact that so few people are willing to make a public stand of defiance. But Jurowski has, and congratulations to him.
A video of Jurowski’s speech can be found at: https://www.youtube.com/watch?v=5xYrg0m-QA4#t=13. The relevant section begins around 7:30. If anybody with a better grasp of Russian than me could translate this section, I’d be most grateful.
Posted by Gavin Dixon at 04:52
Email ThisBlogThis!Share to TwitterShare to FacebookShare to Pinterest
Labels: London Philharmonic Orchestra, Vladimir Jurowski